Wedding etiquette getting your goat? At least every unintended snub and dis on your list isn’t broadcast for the world to see.  When Will and Kate’s invite list was released, it was news for a week – and people were shocked that the Obamas weren’t invited. Apparently since Prince Will is not yet officially an heir to the throne – his pops, Prince Charles, is next in line – it’s not a ‘state occasion.’  (And no, I have no idea what difference that makes or even what the heck it means.)

Sarah Ferguson was not invited, but her daughters, Wills’ cousins, Eugenie and Beatrice, are on the list.  You may recall the great scandal of Fergie trying to sell access to her ex, Prince Albert, a faux pas that far overshadows that time your Uncle Al got drunk at your niece’s baptism, so you can understand her being left off. 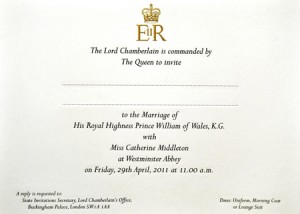 How many websites, samples, and designs have you pored over for your invitations - and all the Royals do is write in someone's name on a simple card. If it's good enough for them...

Then again, who’s going to complain? They’re royalty, for heaven’s sake. They can pretty much do whatever they want.  And their guest list looks rather scintillating as it is – check out the rundown of royal friends and family coming to the big day, along with “Coyote Ugly”-worthy pics, by the Daily Mail.

When crafting an invitation list, a good thing to remember in the age of social media is that being Facebook friends with someone doesn’t necessarily mean you have to spend however-much-money to feed and entertain them that night.  Do you speak with this person on the phone at all? Do you trade constant emails?  Do you have a personal, close history and bond?  That’s what counts.

Be firm – if anyone hints or asks if they are invited, that should almost right there nix them off the list.  Smile and say you have a small venue, your fiancé has to invite his 40 family members from Chile (true story – mine!), etc.  It’s not that you don’t want everyone to be there – I wish I could have invited 400 people – it’s that you can’t.  When the possibly offended, potential invitee gets engaged, they’ll then understand the pressure, both financially and politically, the invitation list causes. 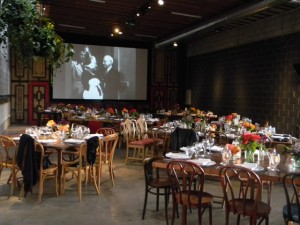 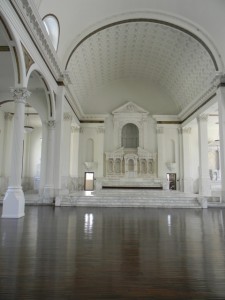 - while Vibiana can host many more, but can be partitioned or draped off for a cozier feel.

Lastly, don’t post wedding updates to your FB page.  Announcing an engagement is fine, but lay low about the wedding planning – otherwise you open up a hornet’s nest of FB friends poking, messaging, and even posting publicly on your wall about details of the event – and you having to figure out how to say, ‘sorry, we can’t invite you.’ There’s something about weddings that shows you how little people still know about common etiquette.  I don’t know a soup spoon from a butter knife (well…actually I do, but let’s just say it’s not a big deal anymore which one to use or when), but being sensitive to a person’s choices about the biggest day of their lives means you have class.  And class is priceless. If the Obamas have any (and I think they do in spades), they’ll send a lovely vase or gravy boat (American made, of course!) and their best regards to the Prince and Princess.  (Though I really wanted to see what Michelle was going to wear!  Sigh…)